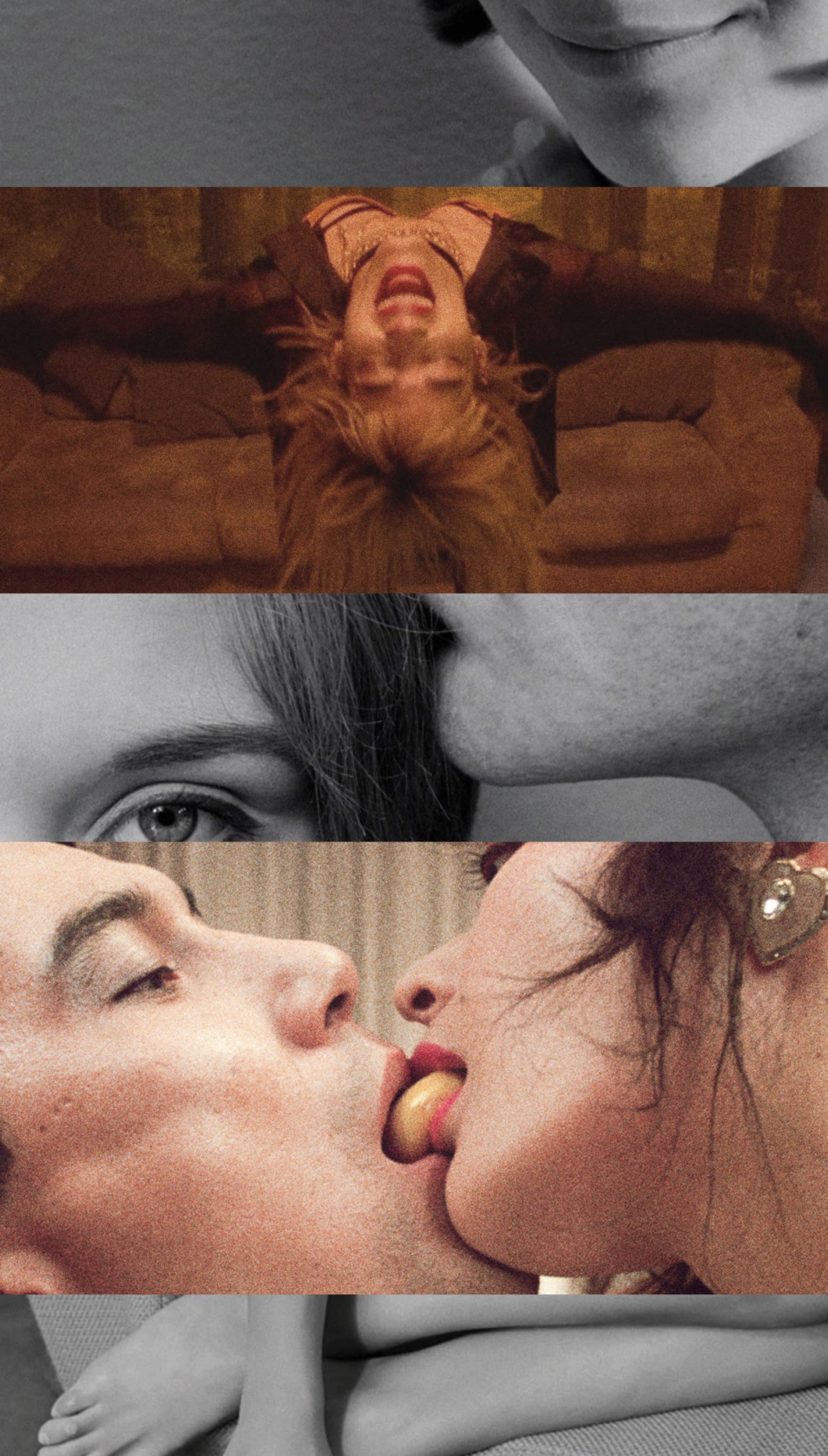 I could almost taste it on my tongue.

Picture a man on a beach, a stranger, his lip gashed from recklessly slurping an oyster. His head is cocked back, so lost in the saline sensation of the mollusk meat that he’s unaware of the blood dripping from his mouth.You’re inches away from this heathen. What might you do then? Given the ocean of possibilities, what if you say nothing, reach over, and run your tongue over the blood from his face.

Where do aphrodisiacs come from? There’s an etymological clue: According to Greek mythology, Aphrodite, the goddess of beauty and love, emerged as a grown woman from sea foam that formed when her father’s castrated testicles hit the waters of Cyprus. Aphrodisiacs too, tend to sneak up on us. Their gifts await those who watch the shore in rapt attention.

Scholars have tried to dissect Tampopo’s campy eroticism, but this film, like quality aphrodisiacs, is best taken in one brave gulp. Eat now, think later. I imagine Itami, who died mysteriously in 1997, would’ve been a whiz at the game of dare. He interrupts Tampopo’s fairly straightforward plot with a series of provocations: In a hotel room scene, a gangster plucks a live prawn from a room service cart and plops it on his lover’s tender belly. As she lets out a pleasure-shriek, a whirligig of giggly, lewd, animalistic feelings gurgle inside me. Would I like that? Could I? Maybe? In another scene the couple passes a fresh egg yolk back and forth, mouth to mouth, Itami’s lens a tight frame on the oral ping-pong match. I make a mental note to consider the creative possibilities of a room service menu next time I’m in a hotel.

To test his point, I asked my friend Felipe—Brazilian, a sometimes-drag queen, who I met in Barcelona—about movies that turn him on. I was curious about his perspective as a worldly gender crusader, and his answer surprised me: Barbara Streisand’s romantic drama The Prince of Tides (1991). “I couldn’t stop thinking about the flashback of Nick Nolte’s character as a kid,” he said. “I was discovering myself when I first watched it, so the idea of homosexual sex—even in this horrific, criminal context—was arousing.”

Then I asked another friend, Justine, who gave me a near-opposite answer: The Siamese cats in Lady and the Tramp (1955). “Their sashaying, fleshy butts; they’re almost too sexy.” (Apparently, she’s not alone in this childhood animation fetish: There are several steamy Reddit threads parsing Shrek’s status as a sex icon.)

I think of the films enshrined in the lexicon of cinematic erotica—Bound (1996), 9 1⁄2 Weeks (1996), Eyes Wide Shut (1999), Y Tu Mamá También (2000), Blue is the Warmest Color (2013), Call Me by Your Name (2017) among them—and wonder why they never had that rousing effect on me. They were provocative, yes, but perhaps the marketing pre-empted the titillating wallop of discovering an aphrodisiac firsthand.

Aphrodisiacs allow us to wade into so-called weird territory. In Ordet (1955), an austere black-and-white religious drama about the death and resurrection of a woman in rural Denmark, sensuality arrives in the void of sexual imagery. The Guardian’s Peter Bradshaw underscored the erotic tenor in a birth delivery scene. (Actress Birgitte Federspiel, who was actually pregnant, allowed director Carl Theodor Dreyer to tape record her delivery and use the track in the film.) “Part of its power lies in the undercurrent of sexual tension: Inger's birth cries sound weirdly coital,” he observes. Even in the clinical setting of a delivery room, it’s hard to muffle the idea that pain and pleasure often arrive tangled together.

A similar abstract quality happens in Jean Luc Godard’s A Married Woman (1964). Here, the camera artfully sketches erogenous terrains—the summit of the knee, the dip of a clavicle, the wandering hand. Learning from his idol Robert Bresson, the original master of the quiet gesture (see The Pickpocket (1959) for evidence of how our hands betray our concupiscent nature), Godard conveys the electricity contained within the lightest graze.

The only thing more thrilling than finding an aphrodisiac is recognizing it in another’s eyes. Once a friend and I found ourselves alone in a dark gallery at MoMA. Projected on the wall was Andy Warhol’s first film, Sleep (1963), a five hour long voyeuristic prank showing nothing but his lover, John Giorno, in deep slumber. But something occurs when you linger long enough to let cynicism fade. Staring at someone so intensely, you begin to feel a fervid seesaw of power dynamics. In one moment you’re a predator, devouring the topography of his face or the texture of his torso at will. In another, you’re a servant to his beauty—slavishly vigilant for every twitch and murmur. This transformation—an erotic oscillation between dominance and devotion—is the pinnacle of aphrodesia. I caught my friend’s eye across the room as this feeling washed over me. We smiled in silence, knowing that we were participants in the tryst. 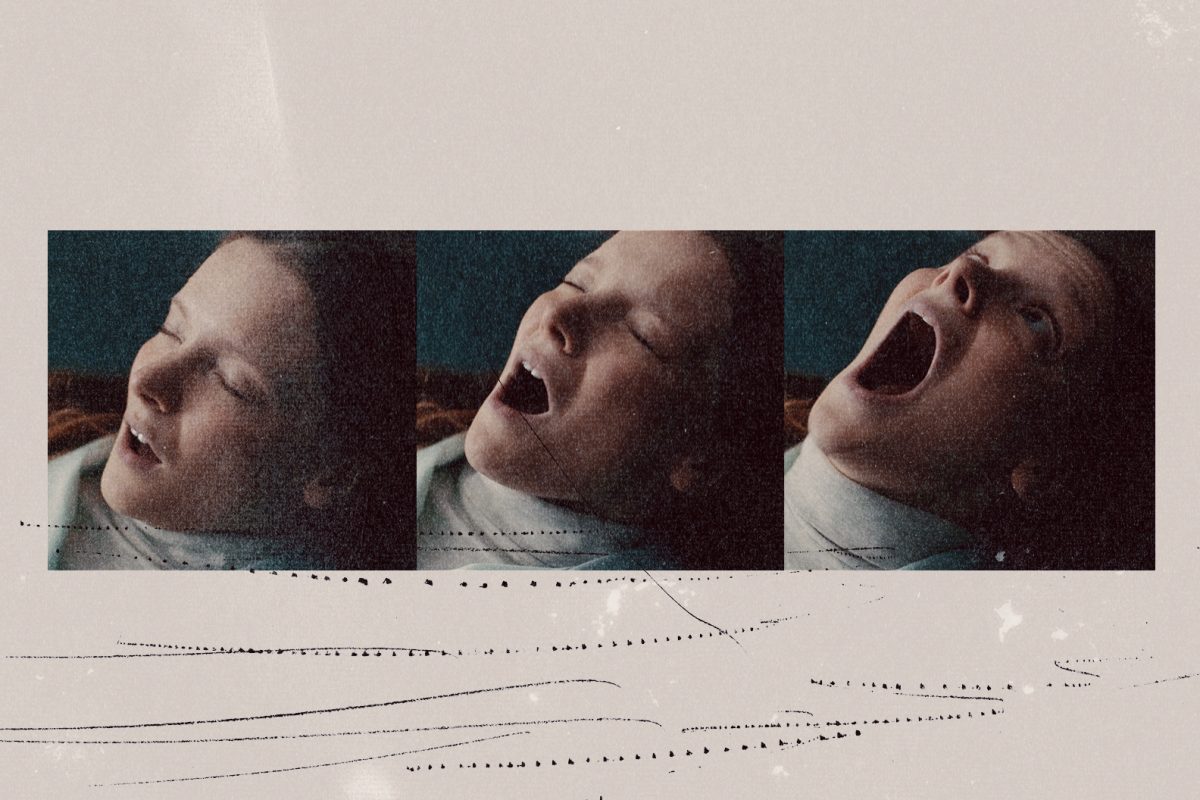 Getting Off on God