Choreographing a Dance Party From Hell

“A Satanic Step Up,” “Busby Berkeley by way of Hieronymus Bosch,” and “Fame directed by the Marquis de Sade” are just a few of the colorful ways critics have described Gaspar Noé’s Climax.

Nina McNeely is the LA-based choreographer behind the astonishing, mind-melting dance sequences that fill much of the film’s 96-minutes. Over the phone, Nina talked to us about her fearless collaboration with Noé and her process choreographing his dance floor nightmare.

What inspired your choreography in Climax?

When Gaspar and I first started chatting, I put together a whole inspiration video for the opening number. It’s kind of funny because my reference video had [Bob] Fosse numbers in it, and A Chorus Line, and all of these classic dance films because I’m obsessed with the camera work and the blocking. I knew the Climax opening number was gonna be a single take, so I was like, “Alright, this is going to be all about blocking and staging.”

Were there any other classic film dance numbers that you turned to for reference?

I love the Rich Man’s Frug, the Fosse number from Sweet Charity. It has some really incredible staging. There’s a crane shot that captures all these little tweaking moves. It’s amazing. Possession was also a big inspiration.

How did you meet Gaspar?

I was introduced to him through Sofia [Boutella] because we know each other from the dance world. I think Gaspar actually didn’t want to use a choreographer at first, which would have been crazy. Sofia was like “No.” She sent him my reel, and one day I got a message like, “Hey, can you Skype with Gaspar in the morning?” and I was like, “Oh my god. Where should I put my computer in my apartment?” Fully freaking out.

What surprised you most about him?

He’s so warm, helpful, and trusting. Some people think these huge directors are big, cocky assholes who are really demanding and telling everyone what to do, but he’s totally the opposite. He would ask everyone, “What do you think of this?” and I was always like, “Really? You’re asking me?”

He likes to know everyone on his team agrees it’s the right thing to do, the right decision to make. Even though he’s definitely in charge, he likes to bounce off other people.

Is it true that you never had all of the dancers in the same place until the night before filming began?

It was crazy, but I do think it’s gotten exaggerated in a few publications. I got three days to choreograph with them in person [before filming began]. One reporter wrote like, “Nina choreographed this whole movie in 24 hours.” Not true!

When I got to France, the first thing I did was finally meet Gaspar in person. Then I hired an assistant, Julie Dorval. She was really helpful because she could curse at the dancers in French and tell them to be quiet because they’re like the rowdiest group I’ve ever encountered. They’d always steal my microphone and pretend like they were having a voguing ball.

Oh, yes. We also didn’t have a full cast until the morning of the shoot and I had to add two people to the number. Cuckoo. In the rehearsal process, the first time I tried to do something synchronized with all of them, it was like the hottest mess I’ve ever seen. I wanted them to bounce, and the Vogue-ers were dipping their hair, and the Crumpers were bouncing, and I was like, “Absolutely not, it’s horrible.” Then I was like, “What if we just walk?” Their personalities popped out and suddenly they were synchronized.

The dancers were the rowdiest group I've ever encountered. They would always steal my microphone and pretend like they were having a voguing ball.

Talk to us about the dancers.

Each had a different background and style. There were two crumpers, some girls that are whackers who do the crazy arms, Vogue-ers, electro which is an evolved version of tectonics like what goth kids do at raves but with more flexing and bone breaking, a contemporary gaga dancer, and a contortionist from the Congo.

I realized Gaspar picked them more for their personalities. They’re not all precision dancers, but when they danced it was almost on a transcendent level. They had so much interactive energy with each other. That was the most important thing. If they didn’t interact, it would have felt really dry and you wouldn’t have felt like you were on the outside wishing that you were on the inside.

What was your approach in choreographing the whole troupe at once?

I really just let them go for it. Except for Sofia’s solo, when she’s throwing herself around that room. She told me, “I just really want you to scream stuff at me.” So I was basically sneaking up behind Gaspar’s shoulder so I wouldn’t get in the shot, and just screaming at Sofia,“Throw yourself on the wall!” She would listen to some notes and then ignore some. The AD was like, “Can we do one where you don’t scream?” because they were trying to record audio. And Gaspar was like, “No, Nina has to yell, that’s what Sofia wants.”

How did you tackle the post-LSD sequences?

I would just show the dancers all of these crazy videos of people on PCP and Flakka and then I would take them each into a hallway and shoot each dancer individually and let them imagine what would their drug trip look like. Some of ‘em went crazy and I was like, “Perfect.”

The atmosphere on set seemed insane. Do you have any favorite memories of that time?

We’d always put on music before Gaspar showed up and have a whole jam session just to get everyone excited. And the dancers would go crazy. They’d battle each other all day if they could have.

Then Gaspar would come in and he’d always say my name quietly like, “Nina, Nina, do you want a double coffee?” and I’d be like, “Do you want to make me a coffee?” And he would go make me a coffee. Little things like that. I was terrified when I first arrived and then I was like, “Oh, no, this is totally a family vibe.”

You know when they’re rubbing stuff all over each other at the end of the movie? That’s supposed to be hummus. And Gaspar wanted to use real hummus at first, and we were like, “You cannot!” Can you imagine all the dancers smearing garlic hummus all over each other in that confined space — I was like, “No!”

What’s next for you?

I’m working on some experimental films of my own. Gaspar really inspired me. I mean, you have to have some balls to say we’re going to shoot this whole movie in 15 days and not have a script. Like, what if it doesn’t work? For some reason he’s not scared, and that inspires me so much. 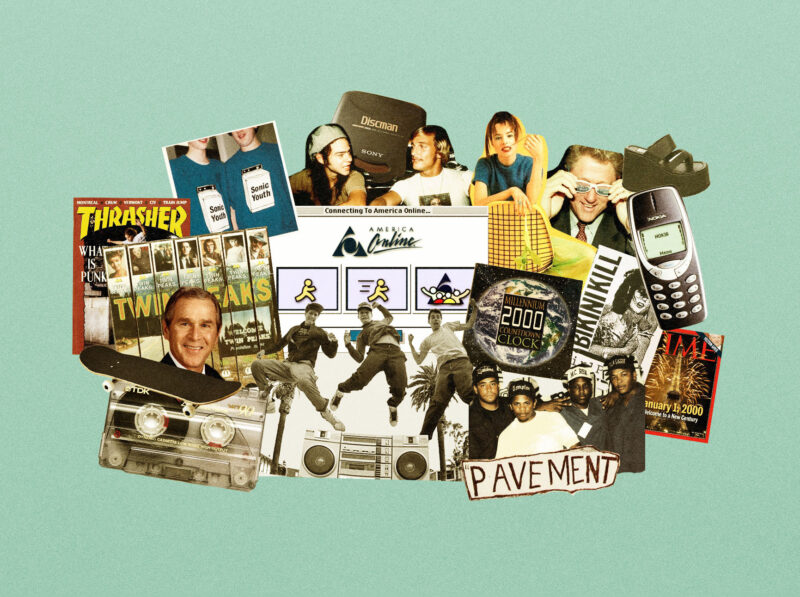 Too Young For Nirvana, Too Old For The Strokes 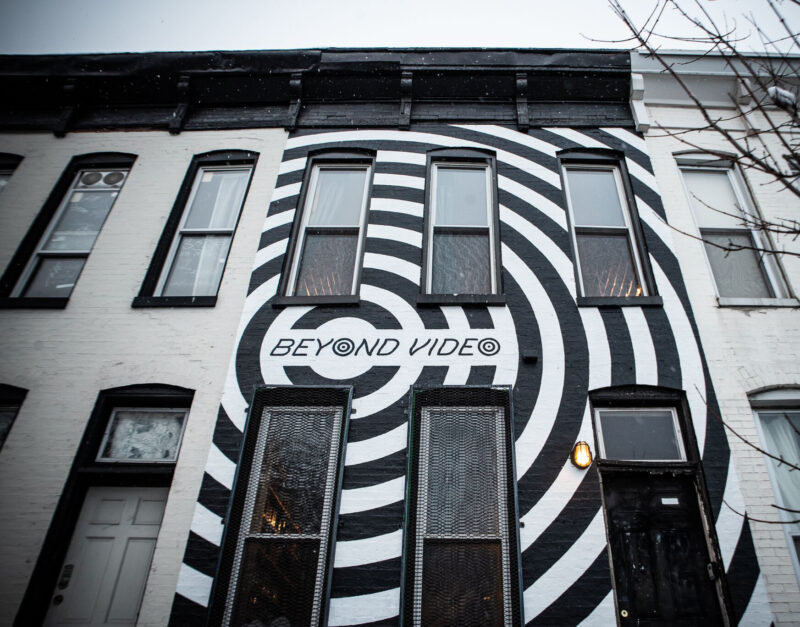 Video Rental is Back (in Baltimore) 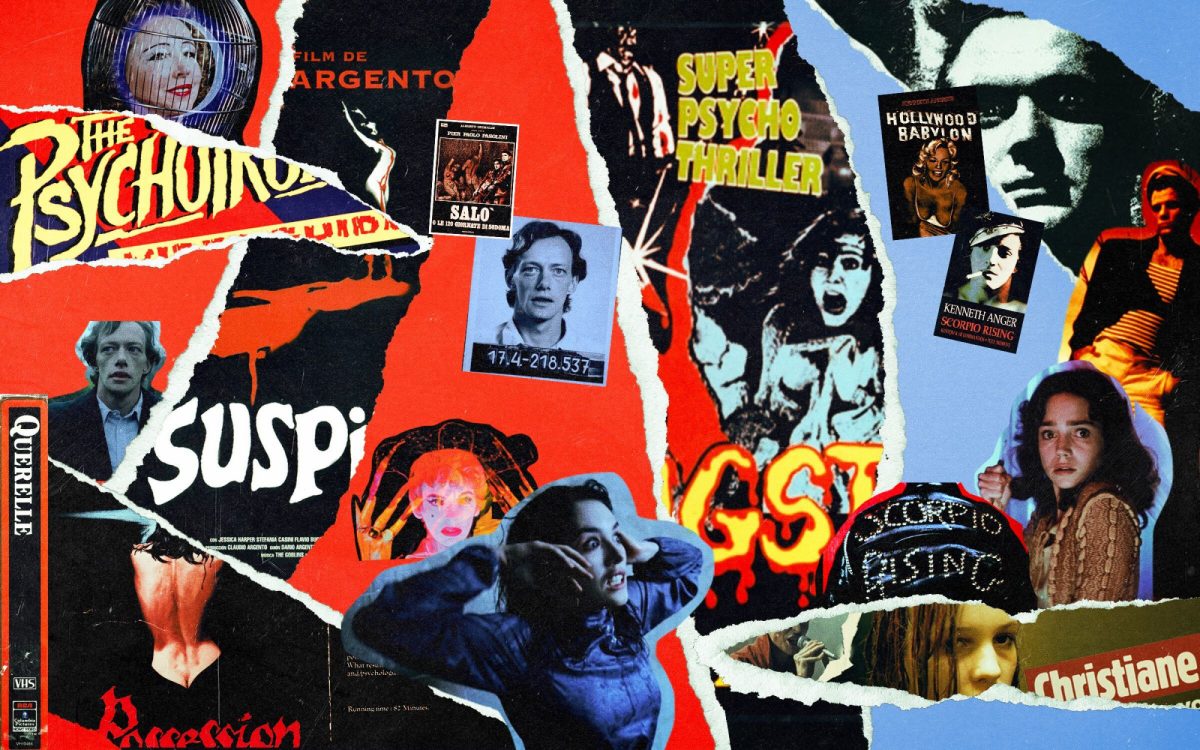 The Cult of Climax