Sadly, our plan to spend the afternoon taste-testing chicken nuggets with Jake was foiled when his mom told us he doesn't actually like sauce. We let him plan his dream day in NYC instead, which started with Chopin concertos at iconic Broadway haunt Sardi's and ended with games at Dave & Buster's in Times Square. To no one's surprise, Jake was just as great of a hang as Gabe.

I'm sure you've noticed that "Nice sauce boy from Eighth Grade" is very popular on Twitter. How have you felt about the reactions to your character?

I'm thankful. Well, I'm happily surprised that everyone's taken such a positive liking to my role in the film, and the film as a whole. So thank you, to whoever watched Eighth Grade and enjoyed it.

Would you call yourself a "sauce boy"? We heard a rumor that you don't actually like sauces.

No, I don't. Well, it's not that I don't like them, it's that I don't really eat my food with sauces. It's not how I was raised.

So you’re more of a purist.

Yeah. Just plain is fine. Plain nuggets. Plain everything. But if sauce is there I will try it. I guess I’m more of a dabbler of sauces if anything. 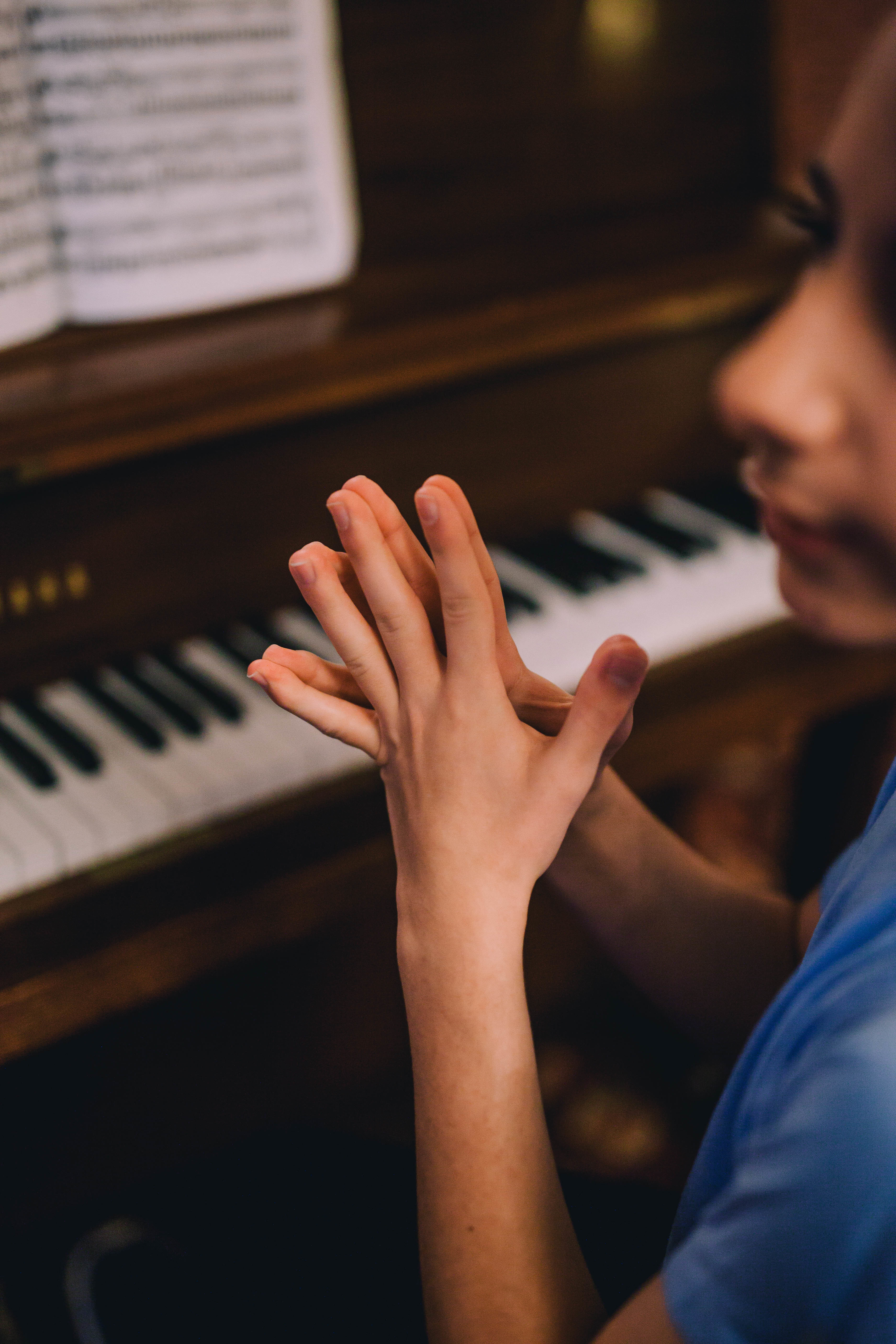 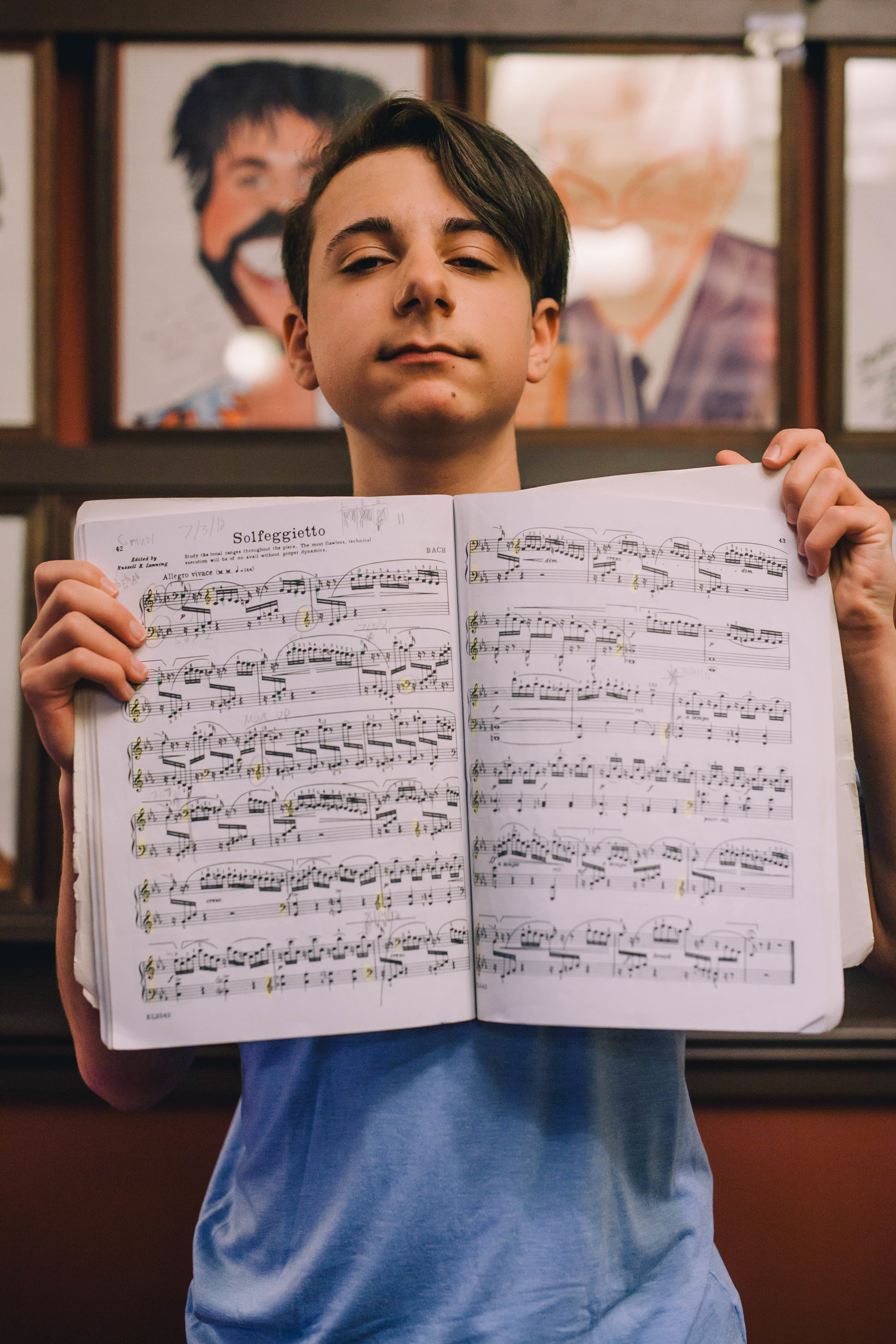 You’re incredibly skilled on the piano. When did you start playing?

Thank you very much. I started playing when I was 6-years-old. My favorite piece to play would have to be this Chopin piece called “E Flat Nocturne.” It just sounds so grand and cool. And E flat, in my opinion, is one of the better chords, next to C sharp, or rather, D flat. They're like grand, mysterious, yet beautiful. Enchanting even.

Chopin is my favorite composer, although it's hard to play most of his songs because his hands were super big. Or maybe he just played on a tinier piano than usual, because you have to jump around and stretch your hands like three different octaves. It's crazy.

In Eighth Grade, Gabe, your character, has so many passions. He's a magician. He's a sharp shooter, he holds his breath under water—

And performs an underwater handstand.

You also are a man of many passions. What are some of your favorite things to do besides acting?

Well, there's the piano. There's swimming as well. I can hold my breath for maybe a minute or two. I actually had a breath-holding competition with Bo [Burnham] on one of the first days of filming. He was testing me. It was cool.

Did you beat him?

So you swim, you play piano.

I like watching TV shows and anime. Sometimes my mom and I watch the more recent episodes of Criminal Minds. They aren’t as good as the previous seasons. I don't know what happened. 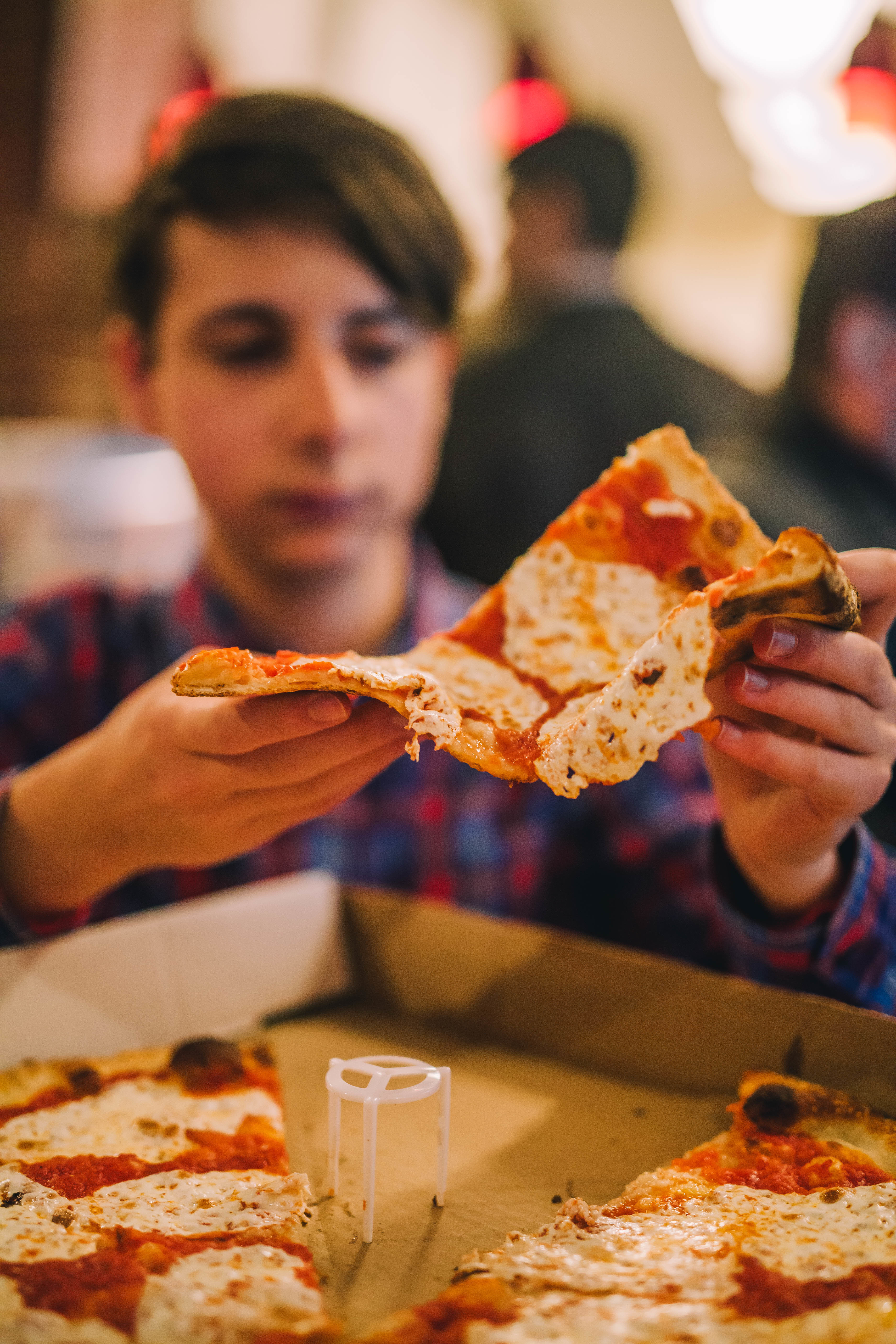 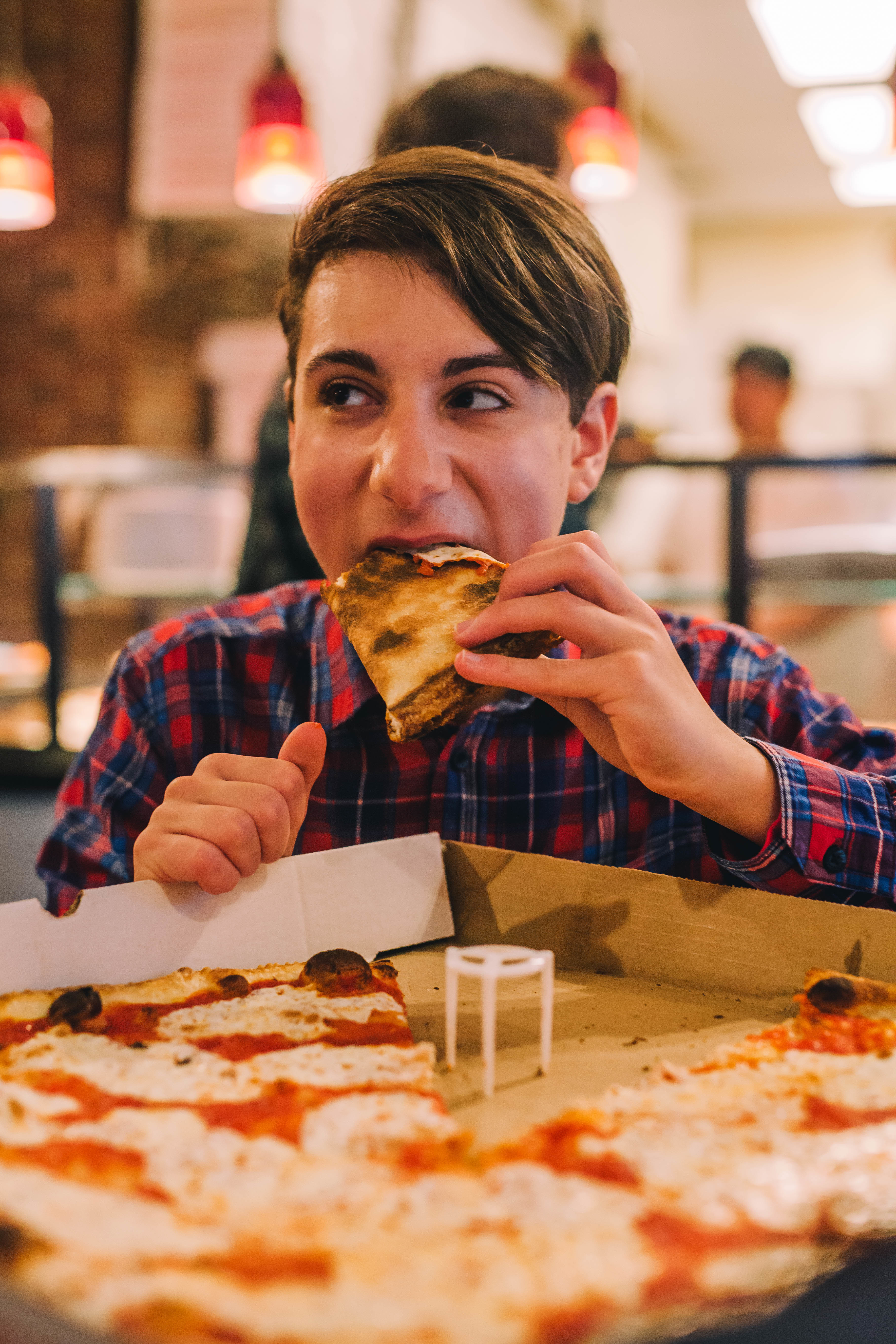 Can you talk about your pizza eating style?

The fold? The New York fold? Well, it was taught to me by my father. As I understand, it's a very ancient technique. I used to eat pizza unfolded and make a mess of myself.

One day I watched my dad, and he taught me how to make the perfect crease, which I still have yet to master. People who cut their pizza with a fork and knife are sociopaths. Pizza is meant to be held by human hands.

When I eat, I also make a perfect bib with pizza napkins because I don't want to mess my clothes up like I used to when I was younger.

Plain pizza, honestly. This was my first Margherita slice. It’s sweeter than I imagined. I guess it's cause of the tomatoes and that decorative lettuce.

Well, I didn't know whether or not it was just there for show. 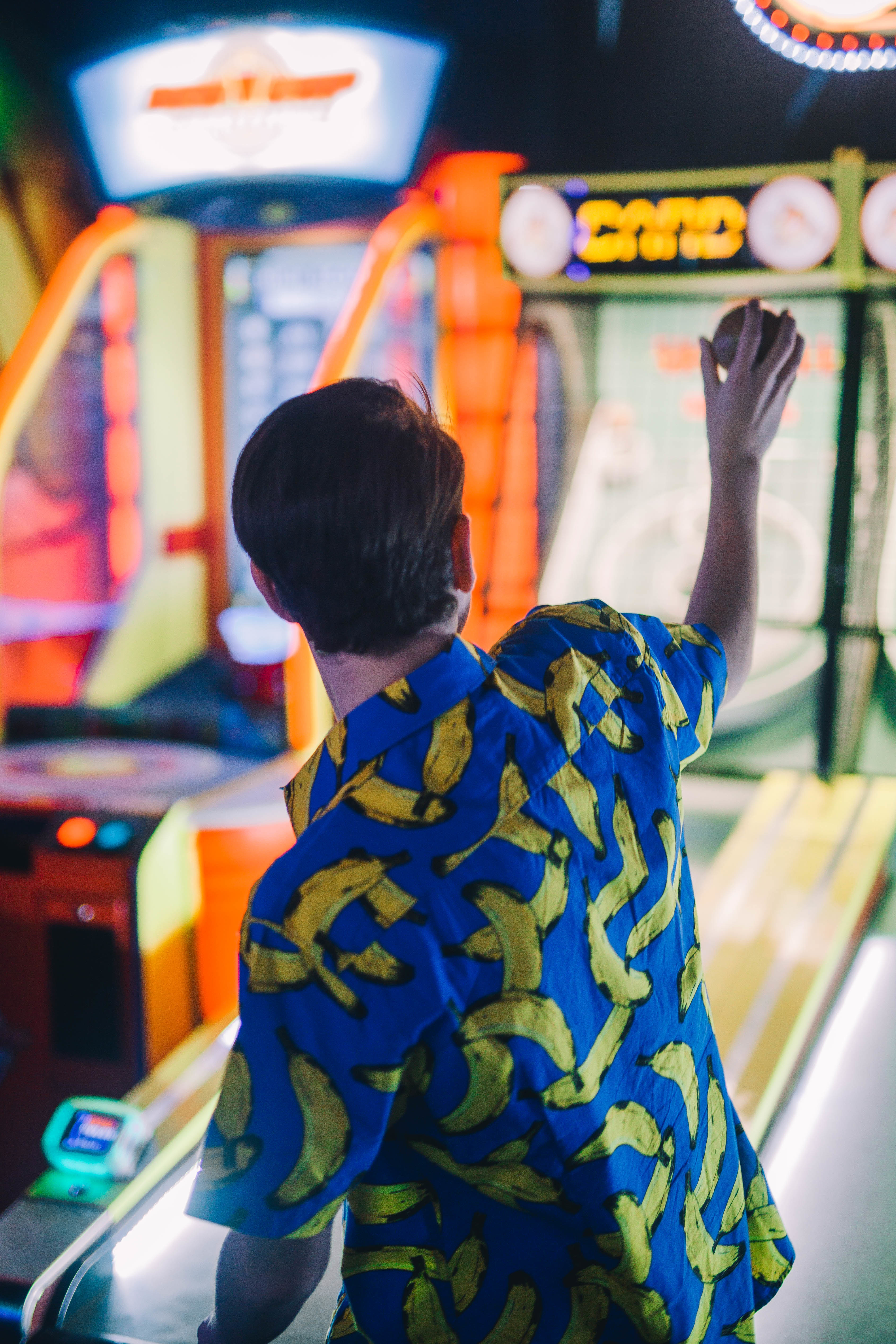 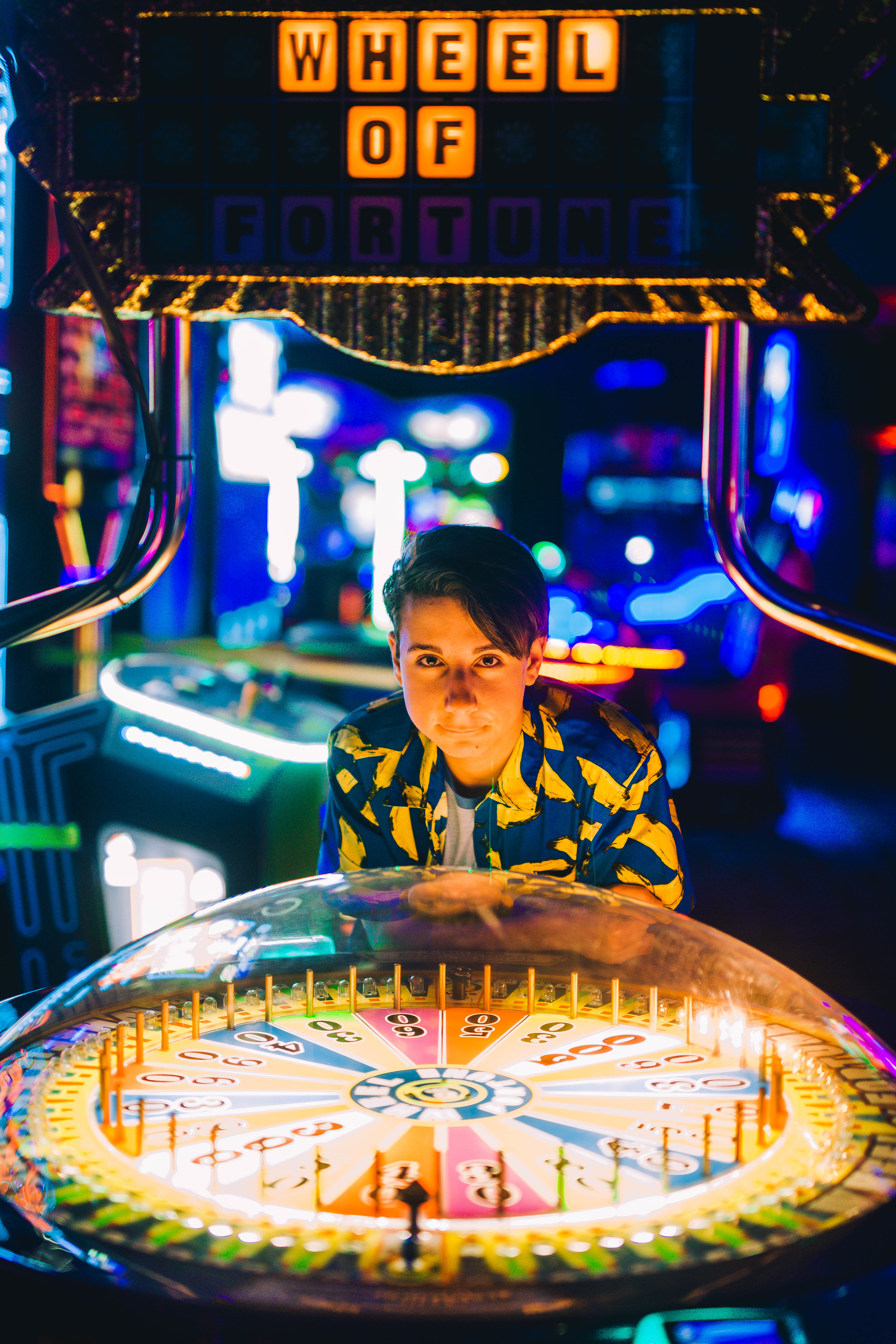 I mean, I play a lot of video games, but I didn't know I would do that well. Then again, I played on the most basic difficulty level, so...

You can admit it. You did great.

I guess I did alright. Thank you.

What does a typical day in the life of Jake Ryan look like?

Well, I wake up and eat breakfast, which consists of either six to eight eggs with heavy cream or a bowl full of nuts, like a mix of nuts, like almonds, cashews, pecans, Brazil nuts, and I believe, macadamias. Then, I either take a shower or play the piano for like an hour. An hour of piano, not the shower. Well, sometimes the shower.

Afterwards, I go on the computer and try and learn something new in Japanese on DuoLingo, do some Khan Academy, do some science or some world history. I really want to get into Shakespeare this year at school.

Sometimes I watch Netflix, like movies and stuff. Or watch the The Dark Knight for the umpteenth time. It’s my favorite movie. I’m a Christian Bale over Ben Affleck guy for sure.

We heard you’ve also been getting into comedy?

Yeah. Comedy is so fun. Performing on a live stage is really cool and laughter is pretty contagious, over all. I like to make people laugh. It’s just very therapeutic to me. It helps me with my self esteem and also maybe helps the audience with their self esteem too. One of these days, I gotta start writing out my own stuff.

This may be putting you on the spot, but do you have a favorite joke?

No. Hold on. I've got this one. I've prepared myself just in case, I think. Okay. So what do you call an insomniac, a dyslexic, and an agnostic?

Someone who lays awake at night wondering if there's a dog.

Yeah. I'm glad I had that one stored in memory.

Eighth Grade does a really good job of being honest about the awkwardness of middle school. So many people related to your character specifically. Was your experience anything like Gabe's?

I think people related to Gabe because a lot of people were awkward like that, back in middle school. I guess Gabe was a nice example of someone just being nice.

My entire school experience has been way different from most people’s. For one thing, ever since I was in second grade, I was homeschooled.

For a long time, I wanted to go back to regular school, because I felt lonely. I wanted friends of my own. I used to whine and complain about it. But then, I came to realize school is not always like what it is in the movies and TV shows and stuff. Thankfully, I figured out that I can make friends pretty easily, for some reason.

You definitely can. I think most people want to be your friend.

Any other things that the world needs to know about Jake Ryan?

I guess another thing is my first concert was Paula Abdul when she opened for Boyz II Men and New Kids on the Block. I got to sit in a Skybox and I remember there were a ton of free brownies.

And next time we hang out, you said you want to go skydiving?

Yes. So, technically you have to be either 18 or 21 to skydive. But hopefully we won't have to wait that long 'til we hang out.

This interview has been edited and condensed for clarity.