The Uptown Theatre in Minneapolis caught our attention in October of 2015 with their marquee endorsement for our captivity classic Room—THE PERSON LIVING IN OUR BASEMENT SAYS IT’S GREAT.

Turns out we were latecomers to the theater’s locally infamous style of commentary—their management has been cranking out weekly (and occasionally viral) marquees since the 2000s. To make up for lost time, manager Patrick Cross caught us up on the genesis of their greatest hits.

Tell us a little about the Minneapolis Uptown Theatre.

It first opened June 3rd 1916. It was originally called the Lagoon Theatre, and in 1929, the theatre was remodeled and renamed the Uptown Theatre. After a fire in 1939, the theatre was completely rebuilt by a pair of local designers named Liebenberg & Kaplan, in the Streamline Moderne style commonly used throughout the state. They also added the now iconic 50ft tall tower, which marks the Uptown area of the city—an area which has transformed from what was a grungy neighborhood for the past few decades to the trendy district it is today. It had great success as a double-feature repertory house in the late seventies and early eighties, and during the nineties, it transitioned into becoming the Twin Cities’ premier venue for exclusive specialized first-run features. It’s also known for its midnight programming on Friday and Saturday nights, which includes classics like The Big Lebowski, Fight Club, A Clockwork Orange and monthly showings of The Rocky Horror Picture Show.

What inspired you to start posting the clever marquees?

The Uptown has a sister theatre, The Lagoon Cinema, which is a five-plex just one block away. I started working at both theatres in 2001 and became the head manager at the Uptown in 2008. Since I’ve been working at the theatres, every now and again, someone would do a funny marquee at the Uptown (Lagoon marquee doesn’t have space) and we always got a kick out of it. But it was rare. I think most managers were hesitant about it since they didn’t want to get in trouble with a studio or the general public or corporate or whatever. When I became the head manager, we did the same, every now and then coming up with something clever. I think after a year or so we just thought, this is fun, why don’t we try to do funny marquees every week? And I thought, I don’t know? I was still pretty new at the job, the few responses we got about them were positive, and we didn’t really consider any consequences, which in hindsight was probably not the smartest move. So, as far as we were concerned, there appeared to be no downside.

What’s the process for coming up with the marquees each week?

We change the marquee on Thursday night and we’ll ask whoever’s working that night if they have any ideas, or sometimes we’ll email all the staff for ideas. If we get any, we go with whatever we think is best. If we ever just keep it simple and put up like the director or star’s name, you can assume one of three things: no one could think of anything good, it’s really cold out and no one wants to be up on a 15ft ladder for very long, or the movie doesn’t really warrant a joke (i.e. something like Son of Saul). Although we did one for Ida—“Ida Hate To Miss This One”—so I guess the Holocaust isn’t totally off limits!

What has been your favorite marquee you've posted?

This is tough. The one we did for Jane Eyre often comes to mind. It was “Jane Eyre - Based On A Book, I Think.” I always enjoy any marquee in the first person where, in effect, it’s the theatre itself saying it.

Have you ever been asked to take down a marquee?

Yes. The first time I put up one I thought was funny was for the French film, The Closet. I believe it was the manager on duty’s last night working at the Uptown and I figured what the hell? I put up “Gerard Depardieu – Is – The Closet.” Not even a joke really but I thought it was funny. The next day “Is” had been changed to “In.” Guess we’ve come a long way since then.

For the movie Man On Wire we put up something like, “The Coen Bros Say This Movie Is Awesome.” Before Man On Wire came out, the Coen bros were in town working on A Serious Man and they went to the Edina theatre (one of the 3 Landmark theatres in the area) to test screen some footage from the film. A couple of Edina staffers were there to operate the projector and whatnot and they chatted with the Coens. Man On Wire was mentioned and one of the brothers said something like “that movie is fucking awesome.” We heard this and went with it. Later when we got the movie, a couple days after it opened, the local Landmark publicist received a call from a Coen bros. rep saying we had to take it down. Understandable. We hadn’t asked them if we could put it up, so, lesson learned.

Are there any marquees you regret?

If there are any we regret, it’s usually because we thought of something better after the fact. Although there’s one I thought was…questionable. It was before I was in charge at the Uptown and before the marquee was like “a thing.” Sometime in the early 2000s, the Uptown played a film from India and the marquee said, “Featuring An All Star Caste.”

Have you ever thought of a great marquee after a film's run? Or, got any good outtakes?

All the time. As far as great marquees after a film’s run, I don’t remember any. As for outtakes, we often come up with a number of things we can’t put on the marquee before we get to something appropriate. I was reminded by a coworker of all the jokes for Obvious Child such as “Your Mom Kept You So You Could See This Movie.” There were many others along those same lines for various other films. 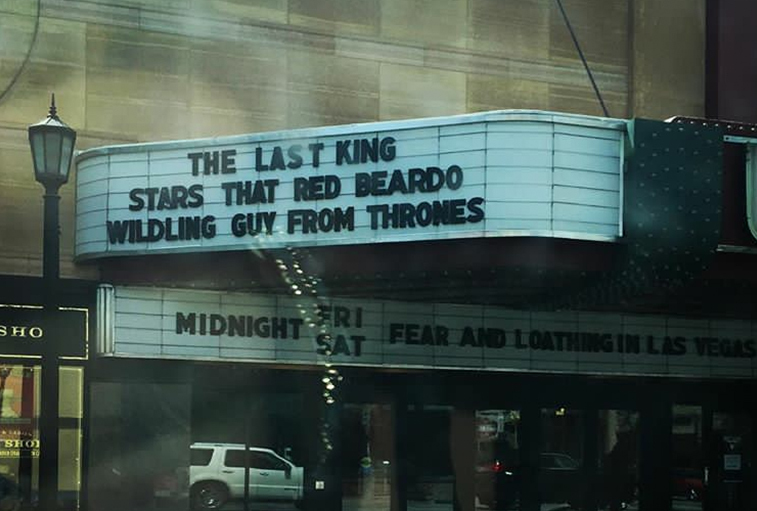 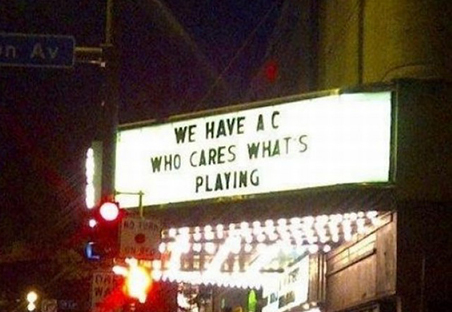 Which marquee have you seen photographed the most (or experienced the biggest reaction to)?

Probably the biggest overall reaction was to one we did for the Errol Morris movie Tabloid. A few days after it opened, no one was really coming. It was also extremely hot out. We took down the title of the film and put up, “Who Cares What’s Playing We Have AC”. That one made a weather report on CNN. The picture of it has occasionally popped up in things since then.

When we played Joss Whedon’s Much Ado About Nothing, we did, “From The Writer Of 4 Episodes Of Roseanne.” Someone took a picture of it and tweeted it at Whedon and he retweeted it saying, “Need We Say More?” We got retweets and mentions for months after that one.

Some marquees (naturally) get more attention than others—what's a lesser-known gem you especially like?

I’ve got a bunch.

The Dance Of Reality - “Nobody Puts Jodorowsky In the Corner”

The Last King - “Starring That Red Beardo Wildling Guy From Thrones” Someone posted a picture of it and the red beardo guy himself, Kristofer Hivju, posted it on his Instagram. I shouldn’t be surprised that these things get back to the people we mention on the marquee, but this one was pretty random. I mean, he lives in Norway.

Inequality For All - “My Dad Is Definitely Seeing This”

The Wave - “The Norwegian Water Twister” 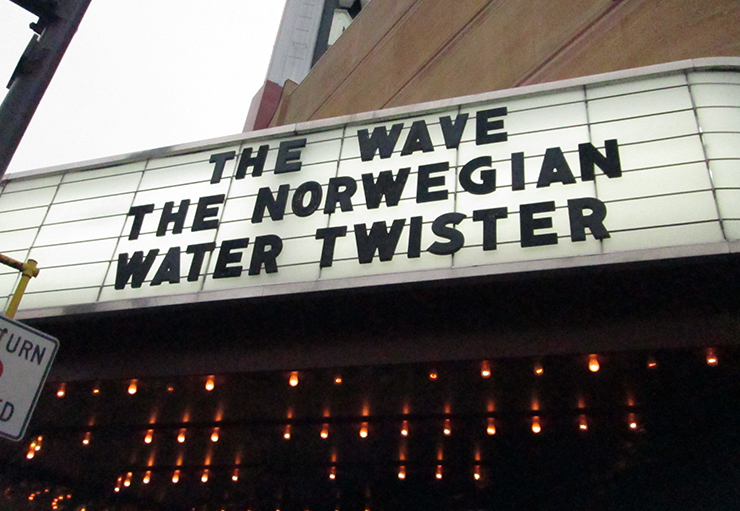 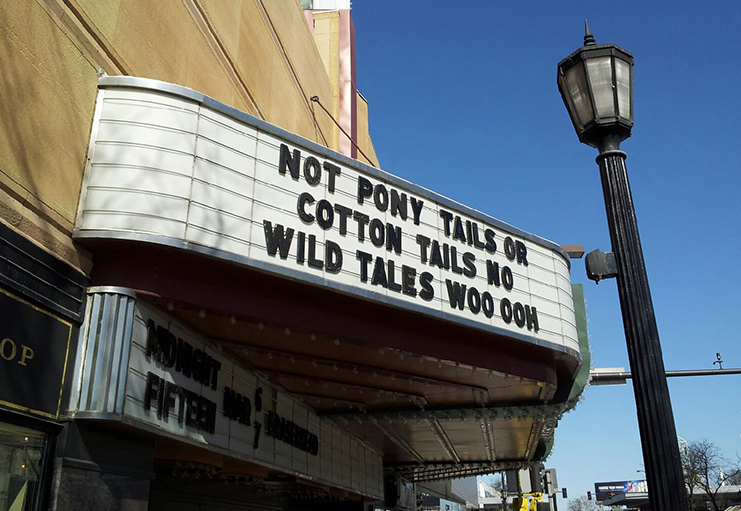 Any ideas for The Disaster Artist marquee?

They’re the best we’ve ever done and I’ll tell you them if you promise the Uptown a two week exclusive... 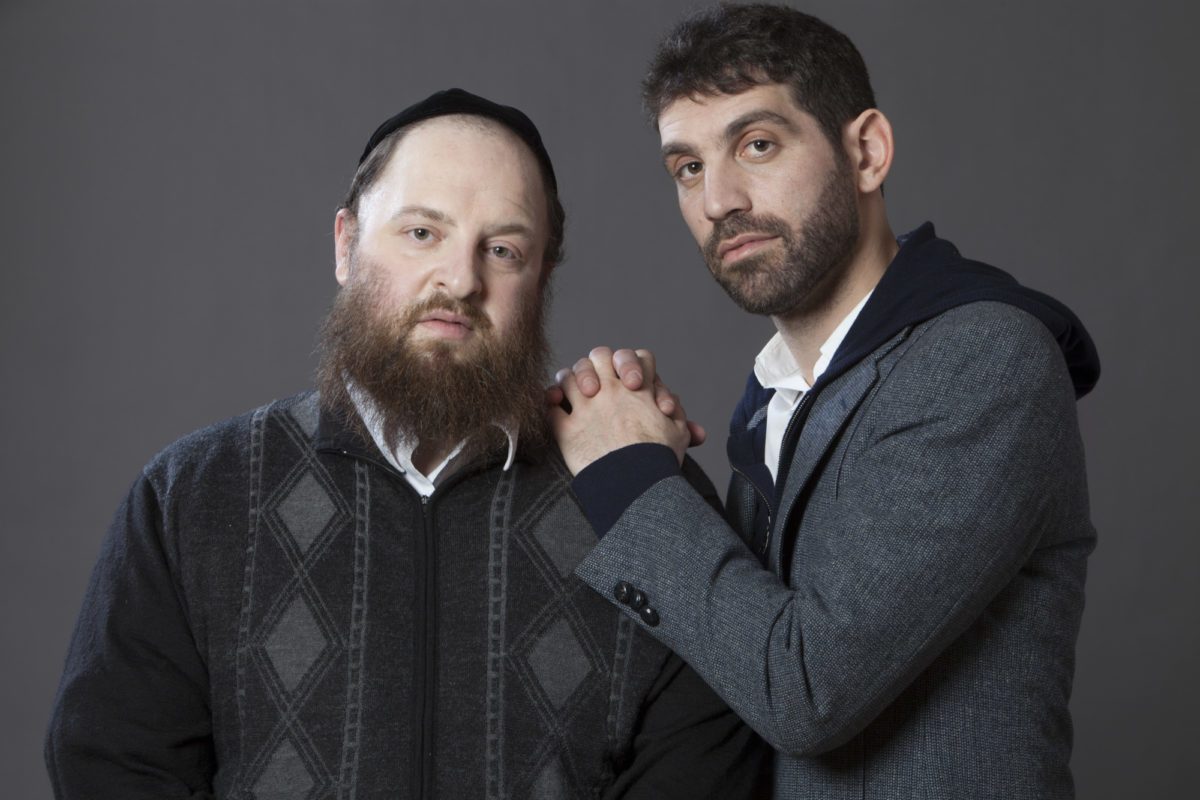